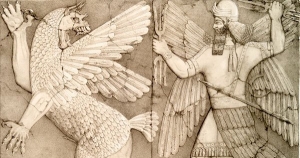 THE ANCIENT BABYLONIAN ORIGINS OF ASTROLOGY, DIVINATION, AND MAGIC

Magic, astrology, divination, and witchcraft have always been fashionable and practiced since the beginning of the world. Every culture has own way of practicing magic and there is a considerable amount of literature on this.

The most ancient roots of astrology and divination known to us come from the ancient Thrace and Mesopotamia and have been culturally transferred though the generations especially on the Balkans and the Middle and Near Eastern Oriental countries particularly remembered and practiced by the contemporary pagan cultural groups.

As Bulgarian and scholar of Assyriology I am culturally attracted to the ancient Thracian and Old and New Babylonian Akkadian astrology, magic, and divination. The decay of astrology started with the Hellenistic or ancient Greek era and therefore their way of practicing astrology is not a subject of my work and research.

These four notions were one single construct in the ancient world and they were practiced interchangeably. The ancient Babylonian astrology is Hermetic, the one based on the original lore of Hermes.

The story legend of King Enmeduranki- the Illumination of Hermes

According to the legend, the first person to whom the gods gave the knowledge of the heavenly signs is En Meduranky (Enoh-Hermes), who was the king priest of Sipar, the city dedicated to the Sun (Shamash), and the seventh king of Mesopotamia before the flood. He was said to have reigned for 43,200 years.

The above is also to emphasize on the divine and ancient nature and origins of astrology, magic and divination. The particular city of Sipar in Sumer was where the first civilization comes from, from the
Black Sea area and it’s bottom, and the city Sipar is the contemporary Bulgarian city Durankulak (Enmeduranki).

DIVINATION IN BABYLON
Scroll to top