ANCIENT ORIGINS OF THE ESSENTIAL OILS

THE ESSENTIAL OILS AND THEIR ORIGINS

The essential oils are part of the herbal medicine and divination and are as ancient as the first known to us civilization is- Mesopotamia. They were used in Sumer and Babylon in medicine, in fragrances, and astral magic and so much more.

The process of extracting essential oils is called distillation and its earliest use known to us in approximately from 5500 BC. The Babylonians kept lists and records on cuneiform tablets of almost every article used by the society; including herbs and oils along with their implication.

One of the earliest written records of distillation is found in the cuneiform text of the Epic of Gilgamesh from approximately 3000 BC where the distillation process is described as placing the herbs in a large boiling cauldron, capturing the steam on the fluffy side of lamb skin, then wringing the solution from the fur to be caught in a bowl where the surface was skimmed for the essential oils as a result of the most ancient art of distillation.

Another interesting source of how the ancients used herbal medicine including fine oils is found in the Assyrian Medical Prescriptions for Diseases of the Stomach translated from Akkadian by R.C. Thompson in 1929:

Much later the ancient Greeks made use of herbal plants, fumigants, perfumes, and oils as the art of extraction and distillation of essential oils is attributed to them, but actually it is much more ancient and as mentioned above, has its roots in Mesopotamia. 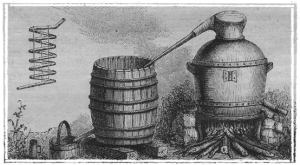 Of course the modern technic of distillation is a perfected method of the ancient distillation with added essential oils. Very important role in the perfection of the method have the alchemist in Europe in the 15-16th century. Paracelsus, Agrippa, and Ficino are only some of them.

THE ESSENTIAL OILS IN MAGIC

In ancient Mesopotamia the oils were regarded as mystic element. They were used not only in the herbal medicine, but also in the consecration rituals and in dedication. In the cases of dedication they would pour oil over the dedicated object or they would anoint themselves. The kings were anointed with oil when crowned.

In Babylon the memorial stones and the tablets were anointed with oils.

The most interesting use of oils in Mesopotamia was their role in magic, which is actually an astral magic as we understand it now, as their magical rituals and consecrations would take place only in appropriate planetary and stellar moment.

According to the Maklu cuneiform magical texts translated by Tallqvist K.L. in 1895 where the oil is of the two supreme gods Ea and Marduk:

the purifying oil of the gods,

oil which softens the sinews of man.

I have made thee drip ; with the oil of softening

which Ea has given for soothing

I have anointed thee; oil of life

I have put on thee.”

In the Babylonian Talmud the use of oil in magic is described the following way translated by Daiches S. in 1913:

Here we have again oil magic. And we also learn here that ‘ the whisperer ‘ had to anoint his head with oil before he performed the act of ‘ whispering “.

“Eab Izhaq the son of Lemuel the son of Marta came to an inn. They brought unto him oil in a vessel. He rubbed himself (with the oil), (and) blisters appeared on his face. He went into the street (and) a woman saw

him (and) she said : The spirit of heat do I see. She did something to him and he was healed.”

Exactly as among the Babylonians.

“In my supplication, my lifting up of the hands, in everything I do, (14) the inquiry I dedicate, in his right and his left l be correctness.”

Lines 15-25 then contain the following prescriptions:

(15) Cypress, fine flour he shall pour out, oil on the libation he shall

put, (16) an offering he shall pour out, oil on the water of the vessel he shall put, (17) of Samas and Hadad, the great gods, he shall inquire. (18) When the omen and the oil are faultless (19) the great gods come near and (20) judge a judgement of justice and righteousness (21) concerning the welfare of the king, the overthrow of the enemy, the safety of the army, the taking of a city, (22) the making of a curse, the raining from heaven, . . .(23) the making abundant of the inwards l and anything

Oil is used in magic and divination almost by every culture all over the world since many centuries. Seams, however that the most ancient traditions of using essential oils and distilling them comes from ancient Mesopotamia.

PRINCIPLES OF THE GRAECO-EGYPTIAN MAGIC

LIST OF SOME ESSENTIAL OILS AND THEIR USAGE
Scroll to top