“Blessed that who knows what he sees.”

The following tables are a summary of the fixed stars, their positions, magnitudes, natures, the coresponding herbs, gem stones, and symbols, so that we can use them in astral magic whan making talismans.

According to Hermes, the power of one fixed stars is proportional to their brightness and closeness to the ecliptic. The brighter, the stronger.

For the purposes of astral magic, however, we take into consideration the lunar transits, that also need to be in an exact conjunction with the fixed star.

The four royal stars form a cross and are particularly important since ancient times. They are the four archangels, the four animals, especially significant when one has them on the most cardinal points in the horoscope: ascendent, descendent, midheaven, lower meridian. These stars are a real fortune for making powerful astrological talismans. 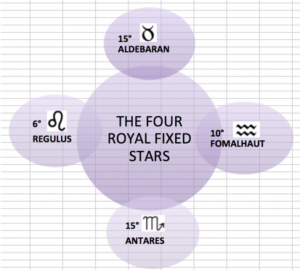 The 30 Stars of Hermes from De Stellis Beibeniis translated by R. Kolev, Anonimous from 379 AD;

THE PROCESS-HOW TO USE THE GEMSTONES?

ON THE IMPORTANCE OF GATHERING THE HERBS YOURSELF
Scroll to top