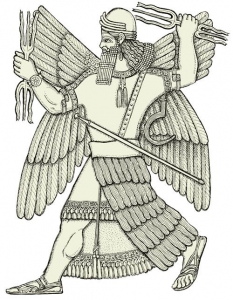 Kayamanu is one of the names of Saturn they have given to him to reflect its slow movement.

Another name given to Saturn – Sun Shamash-God comes from the relationship between the sun and him. It’s because the “secret house” of Saturn rises when the sun sets.

In Mesopotamian mythology Saturn is Ninurta. God of Agriculture ” Gardener of Enlil” is “the God of Wrath,” “Eternal Warrior” he is famous for its heroic feats and victories . In Sumer they considered it malefic, but the most terrible planet and deity was Nergal-Mars.