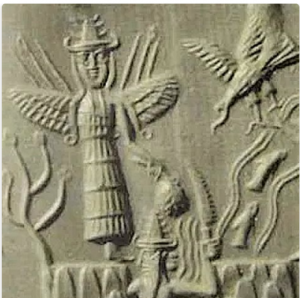 The names Inanna / Ishtar associated with Venus since very ancient times. Inanna is the Sumerian deity, which probably comes from Ninanna- ” Lady of Heaven” and this is because she is the second brightest near the moon, knowing that she was the daughter of Moon God. on tablet from the collection of Erlenmeyer dating from around 3000g BC in a series of five Sumerian signs is spoken about the Festival of Inanna, as a morning and an evening star, which is a direct reference to Inanna, supporting both meanings of Venus as the evening star and a morning star. Of course, this is only symbolic difference. It’s about the only planet Venus.

It is unclear, however, whether the manifestations of Venus as the evening and the morning stras were associated with male or female deities and that’s because in Sumer the gender of the deities is not always clear. Later in Akkad Venus evening star was often considered a male deity, and Morning Star as female. Sometimes the sexes have changed and it’s good to keep it in mind. In the Hellenistic times it was clear that the Morning Star is Athena palas and has a male archetype and that Aphrodite the evening star is a female deity. Our experience shows that this distinction is quite true.

Inanna from Akkad- Venus Morning Star or Athena Pallas in ancient Greece Eastern Venus, one that rises from the east in the morning before the sun. It is a god of war with male qualities and a male deity. There are tablets with her image where swords or other weapons come out of her shoulders and she has wings. Below it is the sun, which proves her morning appearance. Enki is on the right, which associates with her exaltation in Pisces and her friendship with Neptune.

Inanna from Akkad helps the kings to win wars. Inanna is wise deity with nice male qualities. She is very smart and dynamic and less romantic than the Evening Star Venus.

Ishthara in Sumer and Inanna from Uruk Babylon is the Evening Star Venus. Inanna is a female god and goddess of love of redemption, healing, purification. This god is mystical and romantic and associates with the human sexual love. She is less dynamic then the Morning Star because of her romantic nature. Evening Star Venus is Highly intuitive and jealous, and, because of her evening appearance she is an evening star, and is better in a nocturnal horoscope.

She is born in the evening with the phase Evening First- evening Appearance. Then she is strong, very strong seven days before and seven days after her evening symbolic birth. Then she Provides all the qualities listed above with great power.

The Invisible Venus in mythology is Ishthara of the underworld or Ereshkegal. When she is very close to the sun that she becomes invisible, and then she descends into the underworld. Then Ishtar or Inanna becomes Ishthara as called it Babylon.

She’s the goddess of sexual love and potency, of redemption and healing. She is a mystical sorceress or which and is very beautiful. She is the Wife of Pluto.