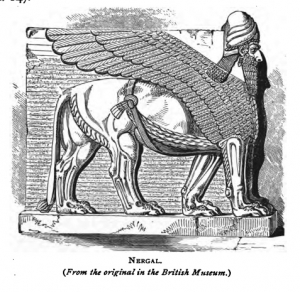 Pluto together with Mars meet the archetype of Nergal, the God of the Underworld kingdom, lord of the underworld – God Nergal. He is the husband of Ereshkigal or Ishthara of the Akkadians, which is the archetype of Venus when invisible. Nergal is the God of War, of destruction, of anger. he causes any disease.

Although Pluto meets the archetype of Nergal there is an opinion that bases on the ” Epic of Creation” of the Sumerians that to Saturn was born another planetary God and he was called Gaga responding to the most distant planet Pluto. There he was awarded the qualities of Saturn. He ranked with him and awarded many similar qualities as Saturn.

Nergal has the qualities both- Mars and Pluto. These two planets are not alike and it is appropriate to differentiate their manifestations.

When Mars rules Nergal, then he is just God of war, aggression, anger, external human manifestations. He more strongly associates with body than soul. It is man’s ability of self assertiveness.

When it Nergal is invisible, he will descend into the underworld to deal with the souls and the fates of the dead, then he becomes Pluto. The invisible Nergal is the true God of the Kingdom of the death. His manifestations are very similar to these of mars. However, they will be very deep and will reach the deepest of the human soul.

This Nergal will be more secretive and his actions if severe due to a bad planetary aspect, will be just as subversive and deep as only Pluto can be.